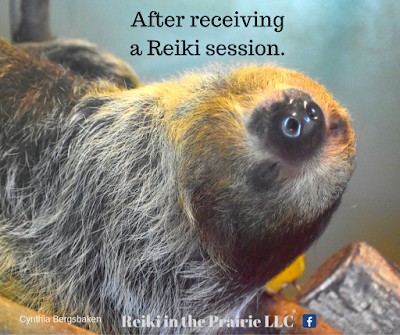 First of all, Reiki is energy healing. The healing energy, which is the same energy we and all living things are made up of, is channeled through the practitioner. The practitioner places their hands over our chakras, (chakras are our energy centers that sense the world around us.) and channels the energy into the chakras. Our individual higher self or Divine spirit oversees directing the energy. The energy then slowly spreads out throughout the body.
Reiki Energy healing is not new, it is ancient.
I have two stories to tell about Reiki and its healing abilities. These are true stories. Names have been changed to protect the person’s privacy.


So, in conclusion, if you have the chance to experience a Reiki session, please listen to your heart and try it.
Written by Cynthia Bergsbaken of Reiki in the Prairie LLC   2015-2017   www.reikiintheprairiellc.com

I invite you to make your appointment now and not wait until you are in pain.  Reiki energy balances your whole system, relaxes you and promotes healing on many levels.
Written by Cynthia Bergsbaken of Reiki in the Prairie LLC  6-1-2017


Here are the clients words from the reviews section.
"Last night I had my first Reiki session given to me by Cynthia Bergsbaken.  I really did not know what to expect.  What I got was truly amazing!"
The lovely young woman who performed the Reiki sesson on me, Cynthia Bergbaken, instructed me to-lie down comfortably for 45 minutes at a pre-determined time while she performed long distance Reiki session.  She told me she was going to cleanse and balance my chakras.  I, never having done this before was not at all sure at what to expect.  If nothing else, I would lie quietly and meditate or sleep.

It was not long before images began to flow; these images were not random, but pertained to a cleansing and blessing ritual.  A Golden Retriever and a long haired Tabby cat came and sat down next to me.  They told me they love the energy that Cynthia releases when she performs Reiki and they always come to experience it.  When the session was over, I told Cynthia that I thought it was neat that her pets join her when she performs Reiki.  Cynthia informed me that the dog and cat I saw and spoke to are indeed in spirit.

My point of view had changed to that of an observer.  I saw myself lying flat, hovering in mid-air in a non-descript open space.  Many spirits all dressed in white stood around me.  I felt they were there to protect me as I had said a prayer for protection while I was to be in such a vulnerable state.  A cherub Angel had appeared to remove a white crown, like a burger king crown, off the top of my head.  The angel flew upward with the crown making way for a powerful stream of white light to flow into the top of y head where the crown had been.  After a period, the angel placed the crown back on the top of my head ending the flow of white light.  I became aware of a spirit with female energy standing by my side.  Although I was able to see some facial features, she was completely white.  She gently touched my forehead, and then over her hands to my throat.  Vivid colors began to appear, lavender at my forehead, blue at my shoulders.  When she reached my heart, which was a lovely green, we were both surprised at what happened.  As she placed her hands on my heart, which was a large green ball, it opened up and out came my two boxer dogs and my cat Peanut, all I love dearly, all who are in spirit.  The female spirit was surprised and delighted at what she saw, I became emotional but it passed quickly.  she lifted my heart over her head with both hands, into the hands of a male spirit above her.

I watched as he placed a small round gold object into my heart, as I looked closer at the object; I was able to see it was a pocket watch.  The male spirit tinkered with the watch until I was able to hear a rhythmic tic-toc.  It was so strong that I was feeling the corresponding pulse in my head.  Just as I was beginning to become uncomfortable with his, the male spirit handed my heart back to the female who then placed it lovingly on my chest.  The female spirit assisted me in sitting upright while someone gently cupped their hands over mine and massaged my fingers.  It was so soothing, especially since my fingers ache from the beginnings of I believe arthritis.

The female spirit guided me to lie back down; she then leaned into my ear and said,
The healing power is within you."  She placed her hand on each chakra point on my spirit, beginning at my head.  The vivid images of colors flowed as she moved form point to point.  While my spirit lay in the vivid colors of red, blue, green, yellow, orange, lavender, and bright white, my perspective changed.  I was still an observer, but I was looking at my solid body.  It was at that moment I realized something had changed and that something was missing.  I can only liken I to the absence of a hum that only yo can hear.  Perhaps you have had a head cold for the past two weeks and all the while, you have a barely noticeable hum in your ear.  Suddenly that hum has vanished, your stuffy head is clear and you feel as though you once again have clarity of thought.

What I want you to know is that although you cannot see it, things are happening during a Reiki session.  your healing session involves many loving spirits, each performing a specific task tailored to the needs of your spirit.  I had some noticeable physical sensations during my session that is true.  Moreover, as we are all individuals, we will have our own unique set of sensations and experiences.  Nevertheless, as I said, it is not as much how I felt during my first Reiki session that inspired me to share my experience, but rather what I was as a Psychic Medium.  I wrote this commentary to tell you that Reiki is real!"  Lori Vough McEwen (aka Gale Stein), author and Psychic Medium.

*Note an update on this last client of mine.  About a week later, Lori Vough McEwen registered in a class for becoming a Reiki practitioner.  I believe she is now a Reiki Master, living in Washington state.  Her books, Gale Stein series can be purchased at Amazon.com.  Look under Lori Vough author.  The books will have author as Gale Stein.

"About a week ago, I was dancing to the eighties for my exercise.  In one weird motion, I injured my shoulder.  I wasn't too bad though.  About two days ago, I was placing clean sheets on my bed and I re-injured my same shoulder.  But this time, it was in pain.  I t felt like I gave myself micor-tears in the muscles that surrounded and support my shoulder.                                And so I immediatly gave myself Reiki specifically for this problem.  After my Reiki session, I had no more pain.  It was stiff and achy, but not painful anymore.  I was able to go to bed that night without taking any pain medicine.  The next day, I again gave myself more Reiki.  This time, I soothed the stiffness and achiness.  My shoulder is still very sore if I move it wrong, but it is healing faster than I thought possible.  With receiving Reiki, I did not feel the need to take any kind of pain medicine.  I am confident the reiki energy is healing my injured shoulder at least 2x faster than normal.   I invite you to try having a Reiki session whether it's for pain, illness, emotional, or just to stay balanced and healthy.

For more information on receiving a Reiki session or Sound bath, please go to services and message me.  For making immediate appointments, please go to https:///www.Facebook.com/reikiintheprairiellc and use the appointment button at the top of page.

Otherwise message me here, 605-237-1701, or email me at Cynthiareikiintheprairiellc.outlook.com

Popular posts from this blog 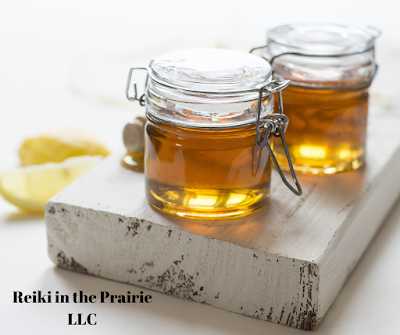 October 18, 2019 It's cold, flu and other sickness season!
From my own experiences I have found that these natural ways are excellent in combating the symptoms. I am sensitive to many medications and so I have learned to find natural ways to heal. I call this my Cold/Flu box.
1).  Thyme tea        Thyme tea is a great expectorant.  Drink a hot tea  a few times throughout the day to help bring up the mucus.  Start by boiling a cup of water.  Add in a tea strainer, 1 teaspoon of dried Thyme.  Let the Thyme sit for about 10 minutes.  Drink the tea slowly.
2).  Netti Pot
A Netti pot is a small little ceramic tea pot that is used to place treated water in to your nasal passages, irrigating them.  This is an ancient technique that goes back to ancient India.  It is a way to cleanse the nasal passages of irritants that cause problems in the sinus region.  Irritants such as:  pollen, bacteria, virus, and mucus.  Irrigating the sinuses is a great way also to combat allergies caused by pol…
Read more 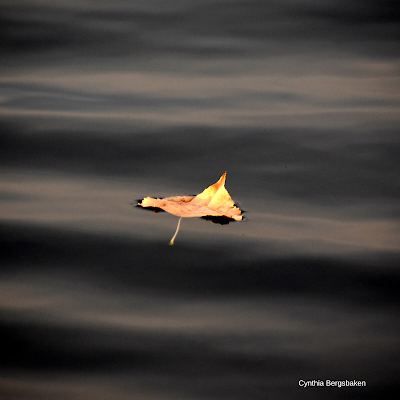 
Receiving Reiki healing is a great experience.  But like any other form of service you receive, it is wise to feel comfortable and confident about and around your practitioner.

Here are a few tips about choosing the right Reiki practitioner for you.

*Meeting with a new Reiki practitioner before committing to taking their service is a must.  Asking questions not only about the Reiki service they provide, but a little about the person.
Each Reiki practitioner has a different personality and different beliefs, just like anyone else in the world.  I would suggest you meet up with the new practitioner days ahead of any thought of receiving a Reiki session.  This way, you can get to know the person and understand:  what Reiki techniques they use, if they are combining other energy type work with their Reiki, what is the type of Reiki they are using, understand the difference between Reiki types, Get to know the person.

Ho'Oponopono or "I Love You" 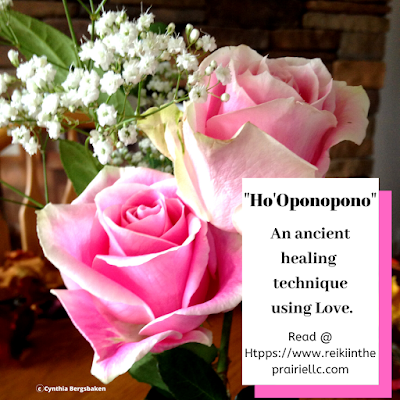 What is Ho'Oponopono and why should it interest me?

This is just a quick back ground of this technique.  My intention is to actually give you the technique to star…
Read more

Cynthia Bergsbaken
SD, United States
Cynthia has a B.S. degree in Microbiology. She worked for many years as a researcher in the Veterinary Science and Pharmacology departments at the University of MN. Cynthia is a sensitive, that has challenged her to become the best she can be in life. Her sensitivities help her in her Reiki practice and everyday life. Cynthia created Reiki in the Prairie LLC in 2015 out of the desire to provide that "little bit of help/support" that is needed at times. Cynthia is an artist creating nature photography & jewelry known as Cyn Bergsbaken Jewelry. www.Etsy.com/shop/CynBergsbakenJewelry . Cynthia lives in SD with her family. Her hobbies are: designing & creating jewelry, and nature photography..

Favorite Books for Self Help & More